Hogmanay 2015 – and as the countdown is on for the midnight bells to signify another year over, I thought it appropriate to ascend the church’s bell tower and show you what the Barony St. John Church bell looks like. 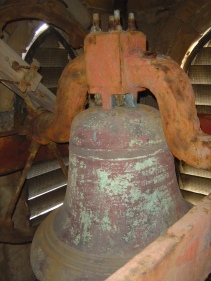 As you can see, the mountings are covered in rust and I’m kinda thinking that, for safety’s sake, it would be better to remove this bell when the building is getting renovated rather than have the fixings corrode and the whole lot comes crashing down to earth 😦

The problem will be – how do we get such a huge, heavy bell out of the tower without damaging the tower or anything else?

Once out though, I have an idea –

We could polish the bell up, remove the clanger, turn it upside down and make it a beautiful feature of the new Events Centre – The Wedding Wishing Bell 🙂

Newly-weds and their guests can chuck a pound coin into the upturned bell and make a wish – and the collection of coins can go towards the upkeep of the Centre or Christmas meals for the homeless or something along the charitable line.

What do you think?

I hope all my readers have a very Happy New Year – and as the bells ring out to signify the end of 2015 and the start of 2016, spare a thought for the former Barony St. John and maybe make a New Year’s resolution to help us save the old building.

Another wonderful discovery I hope you’ll all be interested in; 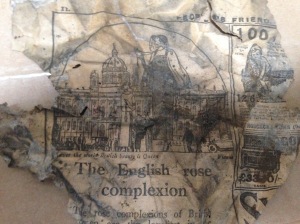 A small scrap of newspaper from “People’s Friend” dated 20th December 1924 with the headline “The Greatest of all Xmas Gifts” (spooky, eh?).

The price of this newspaper was two pence with an extra penny for postage. 🙂

On the reverse is some kind of advert for “The English Rose Complexion”.

So from Christmas 1924 to Christmas 2015, this is Alan wishing you all a very Merry Christmas 😀

Beautiful photo by Peter Ribbeck Photography taken yesterday at high tide and showing the Barony St. John in the background.

This painting was left behind in the Church of Scotland’s office in our Hall building – but it’s not a painting of my church, Barony St. John.

It’s actually a painting of the fo 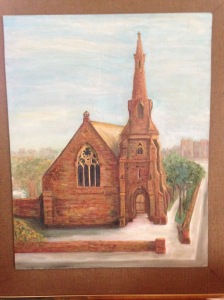 rmer St. John’s Church which was located on the corner of Barr Street and Montgomery Street (opposite the fire station in Ardrossan).

It was sadly demolished in 1991 after the union with Barony Church (hence my church now being called Barony St. John) but a little bit of history is retained as the new housing located where this church was is now called St. John’s Place.

I kinda like the painting though so maybe it will eventually hang in our Visitor Centre or in our Office or Meeting Room.

Maybe it will bring us luck 🙂

PS – Many thanks to Stuart McMahon from the Church of Scotland for helping me discover the history of this painting. 😀

A Good Word for the Good Book

My young children, DanieI and Gemma, were down visiting me and I thought I’d amuse them by getting them to hunt for anything old in the church (I knew there was a bible or two in the pews and it would take them ages to discover them).

Imagine my surprise as they kept coming back with another after another – bibles, hymn books, newsletters, church pamphlets – over 20 in all.

After thinking that some old church related stuff would look great on display, it seems “someone” has put in a good word for us – in the form of several Good Books 🙂

So, here are a couple of bibles with some signatures on them – anyone know who they may be? 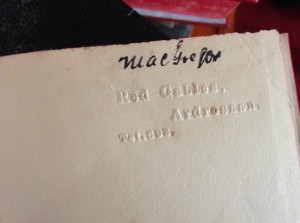 The first says “Amelia Mackay, St. Andrews, Barrie Terrace, Ardrossan” and the second is signed “MacGregor” with the address and telephone number embossed “Red Gables, Ardrossan, Tel. 693” – harking back to the days when you called the operator and simply asked for “Ardrossan 693” 🙂

But it is this bible inscription which really peaked my interest;

If anyone happens to know or think they may be descended from any of the people who owned these bibles, please get in touch with me.

In the meantime, I think these would look great on display. 🙂

Today we started Phase One of the project thanks to Asda Foundation’s 50th Birthday Community Grant – we knocked down the plasterboard walls of the toilet areas; pulled up the floors, ready for treating the dry rot; then we plan to damp-proof coursing the entire area & rebuild the toilet areas again. 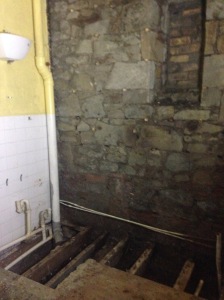 Who would have thought so much rubble could be generated from three small rooms. 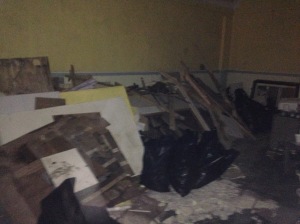 The Mystery of the Little Blue Book

I was showing a member of staff from The Ayrshire Community Trust, Daniella Rossi, around the church, discussing my plans and she happened to mention how good it would be to find something really old like a bible which we could put on display.

As I explained that I had scanned the place several times and only found a couple of relatively new bibles, I took her upstairs to show her the view from the gallery.

As we both came down the wonderful sweeping staircase at the main door, we stopped in our tracks. There, on a shelf opposite the main church door, was a small blue book measuring about 3 inches x 2 inches.

It was plain to see and yet in all the times I had been around the building I had never seen this book. Not only that, Daniella was convinced it was not there when we went up the stairs because I stopped at the shelf to show her the marble war plaque on the wall.

How did the book get on the shelf – and who put it there? This will probably always be a mystery. 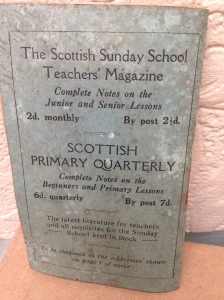 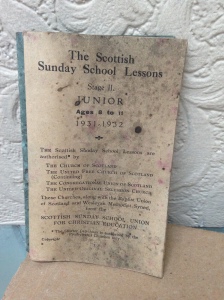 The inside page mentions that this book is for “Junior, ages 8 to 11” and the back cover advertises “The Scottish Sunday School Teachers’ Magazine” which costs two pence or two and a half pence if it was being sent to you by post. 🙂

Maybe my wish for “something old which we could display” was granted. However if the Church of Scotland would like this little memento of a time gone by please don’t hesitate to contact me.

After a week of failed funding bids, leaking roofs, water ingress and bad, bad vibes, the prospect of turning these iconic old buildings into a Community and Events Centre is looking very, very distant.

Maybe it’s just a beautiful dream – but a dream none the less? 😦

PS – many thanks to Jeanette Ramsay for the lovely sunset photo.

I suppose it was inevitable….

Allowing a puppy dog to run around an abandoned church would eventually lead to him having a mishap.

I kinda hoped, having gone outside, he wouldn’t feel the need to leave his mark inside – especially not in the church building (the hall building is slightly less sacrilegious).

And to make matters worse, the heavy rain and winds have thrown up even more leaking spots in the church roof and the rainwater is coming in like a sieve and bringing pieces of ceiling plaster down with it. 😦