Gone but not Forgotten

Some time ago, I wrote a post From Death Springs Life about the font situated at the front of the church building and how it was dedicated by the parents of two fallen soldiers in the Great War.

Well, a local chap by the name of William Parker has been doing some digging and came up with a fascinating story.

About ten years ago, William was researching for a book he was producing about the opening of St Cuthbert’s Church in nearby Saltcoats.

One of the main benefactors for St. Cuthbert’s was apparently a Mrs McIsaac and it was her son-in-law , Mr Charles Addis, who spoke on her behalf at the Opening Ceremony as did another donor, a Mr. James Mutter (You may remember him from another post James Mutter’s windows about the person who installed the two stained glass windows either side of the alter).

Anyway, Mr Addis’s sister was married to Rev Robert Adamson, the minister of St. John’s Church in Ardrossan. This means that the font which is now in the Barony St John was, as we thought, gifted to the original St. John’s Church but what we didn’t know was that it was gifted by St. John’s own minister and his wife.

Robert is the brother of George Addis Adamson who is also on the memorial. Both brothers are also on the Ardrossan memorial.

The plaque on the back of the font is photographed below.

Fell in action at Passchendaele on I2th October 1917.

Here is the plaque showing their names on the Ardrossan war memorial  just across the road from the church.

Every year since I took over the Barony St. John church in Ardrossan, I have placed a poppy on the remembrance plaque on the wall at the entrance to the church.

In 2015, it was just a single poppy but in 2016 I felt it deserved a little more than that and so I placed a poppy remembrance cross on the side of the marble plaque.

This year, with so much anti-poppy feeling around, I decided to get a small poppy wreath and place this at the foot of the plaque.

The plaque remembers those members of the congregation who died in the Great War or 1914-1918.

It’s hard to believe that it has been two years since I started blogging this journey.

Things have slowed down since then and my updates have become slightly less frequent but here we are at my 200th post on my 2nd year anniversary of blogging (anyone would think I had planned this LOL).

I hope you have enjoyed reading my trials and tribulations, the woes of owning a disused building and the joys of renovating a historical landmark.

I hope the next 100 posts will be just as insightful, revealing and entertaining.

Thanks for following my exploits.

In previous posts (Victorian Adverts 1 and Victorian Adverts 2 – Cure Alls) I described some advertisements found in a pamphlet dated May 1893 which was rescued from some fallen masonry from the gallery area of Barony St. John’s church.

Here are some more ads which caught my eye;

The Zoka Hand Camera was introduced by Jonathan Fallowfield in 1894.  It was a very popular inexpensive camera, mainly designed for beginners and youths. This advert and its description as a “Detective Camera” was obviously aimed at the youth market.

The camera was fitted with a fixed focus achromatic lens. The plates were held in place by a spring and once exposed you would pull a knob and the plate would drop down to the lower part of the camera and at the same time a new plate was readied for exposure.

I couldn’t find anything about Hinksman’s Asthma Reliever except on a blog post http://igcdadsmemoirs.blogspot.co.uk/2005/12/memoirs-of-fishermans-son-part-1_27.html My Dad’s Memoirs: Memoirs of a Fisherman’s Son.

“As soon as I felt an attack coming on or awoke during the night to find myself in the throes of an attack, I would put about a teaspoonful of the mixture in the oval depression on the lid, set a match to it and inhale the smoke which was given off. Relief came within a very short period: less than two minutes. Wherever I went as a boy I had my tin of Hinksman’s with me: this continued until I was 16 when the burden was lifted from me as mentioned later.
Other children in the village also suffered from this dreadful affliction: some like me used Hinksman’s, others a similar product called Potters’ Asthma Cure or herbal cigarettes. The latter I tried from time to time but found no help in them. However as it gave me a feeling of superiority over my fellows, I used, deliberately to smoke those cigarettes from time to time: to the great envy of my fellow pupils!” 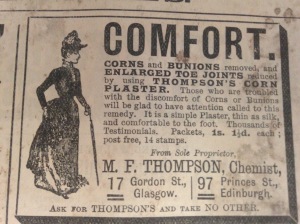 Although I couldn’t find any references to Thompson’s Corn Plasters, corn plasters are actually still sold in chemist shops. These days they contain salicylic acid which removes the build up of hard skin formed in areas of the foot which experience excessive pressure (around the big toe area of women who squeeze their feet into narrow fitting high heels, for instance).

I don’t know if it was salicylic acid that was used in the Victorian days but it must have been some kind of acid to burn the skin off. Ouch! 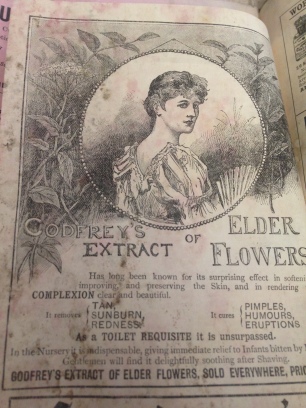 Godfrey’s Extract of Elder Flowers allegedly cured pimples, humours and eruptions and could “speedily remove all tan, sunburn freckles and redness”. The cream was prepared by Benjamin Godfrey Windus and later sold through Messrs. Willoughby & Co.

Benjamin Godfrey Windus, 61 Bishopsgate Street, was engraved on a Government Stamp which was pasted over the cork of every bottle, “without which none can be genuine”.

The Y & N corset was granted to Robert Alfred Young and Robert Neilson (Y&N) under British patent no.116 on 10th January 1879. It was described as a “more durable and yielding” corset but the sketch on the advertisement does not give it justice as this photo shows.

This is an absolutely awesome photo named “Sunset over the Barony Church Ardrossan” by Velton; 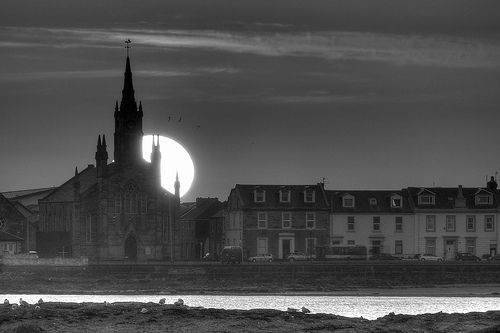 And this cracking one from Carol-Ann Walker Photography;

Or how about this one by Dylan Walker Photography? 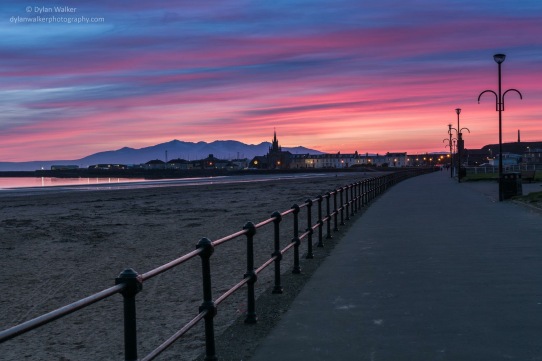 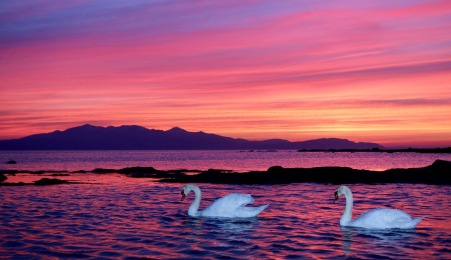 And this beautiful photo by Pauline Clements 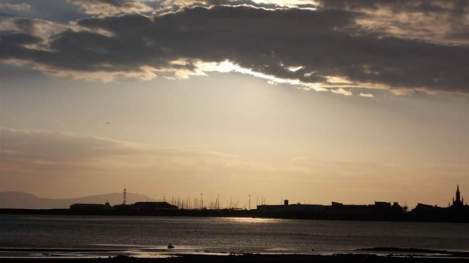 So what’s your favourite? 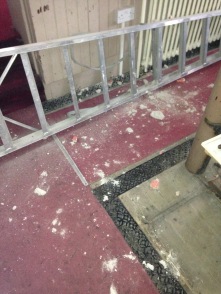 As you can see in the photo below, some of the plaster has come down to the left of the church organ and some to the right. The plaster that fell to the right landed in the upper gallery and I’ve had to put a bucket up there to catch excess rain water. 😦

I have to take solace in the fact that the architects involved in this project tell me the whole of the plaster will be coming down anyway during its conversion in order to make the room safe. But I still feel sorry ever time I see another part of the building collapse.

Well, I am flabbergasted!

One of my colleagues, Norma Baillie from PrioritEyes, was so impressed with the Personal Safety courses I developed for people with low or no vision that she nominated me for the RNIB’s “Teacher of the Year Award” in the Vision Pioneer Awards 2017 – and I have just been told I have been shortlisted to the final three in my category.

This is a huge honour and I feel very humbled. Many thanks to Norma for doing this.

The final takes place on Tuesday 12th December in the Royal College of Nursing in London.