With extensive work getting done on our hall building, I began to wonder how long this building has survived for.

The Coca-Cola Company, then known as the Pemberton Medicine Company, was born in Atlanta, Georgia on 15th January.

The Royal Society for the Protection of Birds (RSPB) was founded on 17th February in Manchester and originally known as “The Plumage League” as they campaigned against the use of plumage in women’s clothing.

On 31 May, the Naval Defence Act was published and it dictated that the Royal Navy’s fleet strength must be equal to that of at least any two other countries in the world – obviously changed days as Britannia hasn’t ruled the waves for quite some time now.

Shockingly, it only became a crime to abuse a child from 26th August 1889 when “The Prevention of Cruelty to and Protection of Children Act” came into force.

And overseas, the last official bare-knuckle boxing title fight ever held was fought in Mississippi 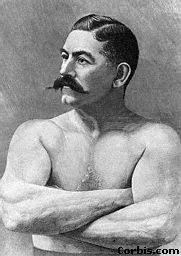 Infamous gunslinger and latterly sheriff of Dodge City, Bat Masterson was employed as peacekeeper and official timekeeper of the fight which lasted 75 rounds – a total of two hours and 16 minutes of gruelling pugilism.

To make matters worse, back then, each round only had a thirty second rest period as opposed to sixty seconds nowadays and the temperature in the outdoor ring reached over 100 degrees in the blazing sun as a crowd of between 3,000 – 4,000 cheered them on.

If you think boxers these days are fit, they have nothing on bare-knuckle boxers of days gone by.

Hi, my name is Alan Bell and the purpose of this blog is to document my trials and tribulations of moving from the tiny Highland village of Ardross to buying a disused church in Ardrossan on the West Coast of Scotland and converting it into something the local community would be proud of ....... I hope. :-D