You may remember I told you all about how the Great Western Railway ordered that all the different local times throughout the country, set by the sun, should be synchronised under a single standard time, “London time”, for their train timetables (see The Definition of Time post). This was back in 1840 and led to the standard Greenwich Mean Time (GMT) that we all know and use today.

Well, I was walking Ben in Saltcoats today and I noticed that they had a giant sundial on the harbour. 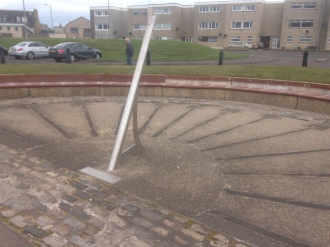 But what really interested me about the sundial was the plaque at it’s base. It read; 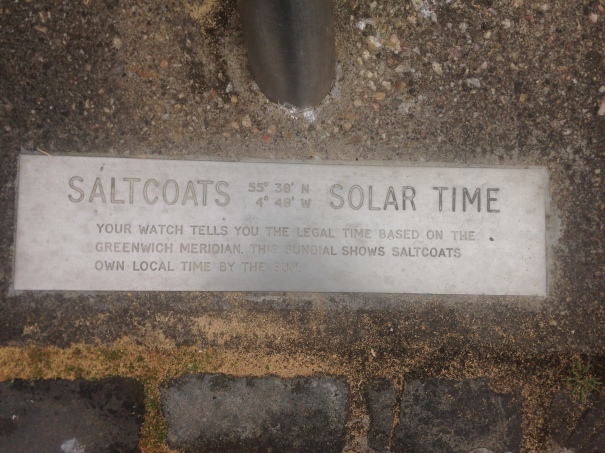 Your watch tells you the legal time based on the Greenwich Meridian. This sundial shows Saltcoats own local time by the sun.

It seems that people definitely felt aggrieved when local time was replaced by “London time” or “Greenwich time”.

I wonder how long there has been a sundial at Saltcoats harbour. (But I much prefer our clock tower at the Barony St John in Ardrossan. 🙂

Well, back in th 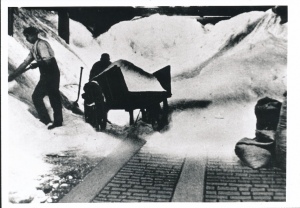 e 1500s, King James V paid for a salt panning industry to be established here. The “salt cots” were on the seashore and gathered the sea water, which was then boiled dry to leave behind sea salt, which was then used to cure fish – a godsend for a small fishing village as this was.

As we Scots speak with quite a broad accent, the “salt cots” name used to identify the village that sprung up around them was pronounced “salt coats” and so when it came to writing the name down, the English wrote it as it was pronounced and the anglicised name stuck – Saltcoats.

Today, Saltcoats is part of the”Three Towns” alongside Ardrossan and Stevenston (see my post Omen 5 – The SAS Omen).

And it was in Saltcoats in 1792 that Betsy Miller, the first woman ever to become a registered ship’s captain, was born.

The daughter of a ship’s captain, Betsy became a proficient sailor and, at the age of 46, took command of her father’s ship, the Clytus, when he died. She was then listed in the British Register of Tonnage as a Sea Captain.

She spent the next 22 years shipping coal and limestone between Scotland and Ireland (50 years in total if you count her time working with her father).

The ‘Clytus’ was a coaling brig made from the wreck of a French man-o’-war, bearing the same name and differed from other vessels in the coal trade by having a poop deck with a cabin on it which was used by Betsy as her Captain’s Quarters. 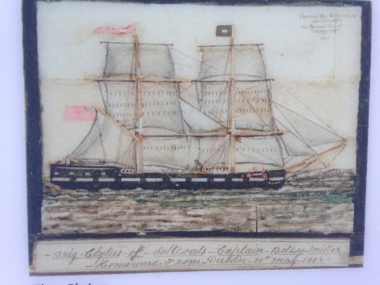 The only other person allowed into Betsy’s quarters was, according to http://www.ayrshireroots.co.uk, “her first mate who was single, handsome and came from the same seafaring background. Captain and mate slept there together, which didn’t raise an eyebrow either at sea or on land, because Betsy’s mate (and chaperone) was her sister Hannah.” 😀

Betsy, known for sailing in the most atrocious of weathers and for dressing as a lady at all times, retired in 1861 aged 69 as one of the wealthiest women in Ayrshire. She died three years later in 1864.

The plaque shown above is situated in Saltcoats harbour and honours this extraordinary lady of the seas.