From racism to USA

As I mentioned in my Ship to Shore post, I wanted to do some research into the significance of so many ship sketches carved into the pews of the Barony St. John and this is the first thing I have found; 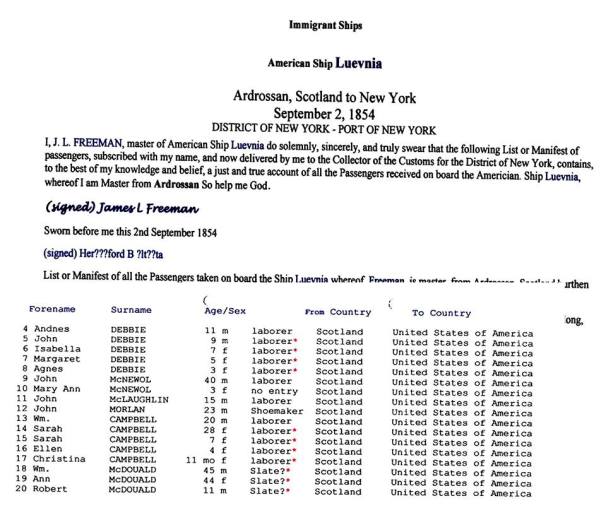 As you can see, this is the passenger list of an American ship, Luevnia, which sailed from Ardrossan to New York on September 2,1854. James L Freeman was the Master of the ship.

This ship, as many others, was taking people emigrating from Scotland to America. As in Ireland, the potato famine had sent the Highland population into starvation and a widespread outbreak of cholera in the 1850’s further weakened them. 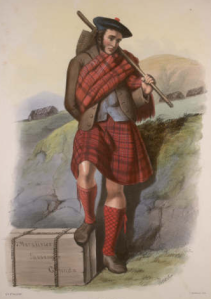 The ongoing Clearance policy (moving families out of homes and replacing them with sheep following the unsuccessful Jacobite Rebellion and defeat at Culloden in 1746) resulted in starvation and death by the thousands, so the people moved southwards to the cities of Glasgow and Edinburgh and eventually onto boats to America, Australia and Canada.

Intriguingly, this particular ships passenger list has passengers names, ages and occupations and children as young as 11 months are classed as labourers. I wonder if families had to work for their passage?

As if famine, plague and Clearances were not enough, the Highland people had also to contend with home grown racism.

From around 1850, the Highland Clearances were supported by a belief that the Celtic “race” was inferior to the Anglo Saxon “race”. Scotland was divided into the Lowlanders (Glasgow & Edinburgh areas) and the Highlanders (Perth upwards).

A popular book at the time, George Combe’s The Constitution of Man (1828), provided a framework which would be used by some to support theories of racial superiority. In 1850, another book was published, The Races of Men by Robert Know, which asserted the inferiority of the Celt compared to the Anglo Saxon and Nordic races.

Now the odd book getting published does not constitute racial hatred on a wide scale but when national newspapers back up these claims, you begin to understand just how this hatred was propagated.

The racist view that the economic failures of the Highlands were due to the shortcomings of the Celtic race was shared and expressed by the three Scottish newspapers, The Scotsman, the Glasgow Herald and even the Inverness Courier.

Shockingly, in 1851, The Scotsman wrote;

“Collective emigration is, therefore, the removal of a diseased and damaged part of our population. It is a relief to the rest of the population to be rid of this part.”

Similar views were held by senior public officials – Sir Charles Trevelyan was co-founder with Sir John McNeill of the Highland & Island Emigration Society and in a letter to McNeill in 1852 he wrote;

“A national effort” would now be necessary in order to rid the land of “the surviving Irish and Scotch Celts”. The exodus would then allow for the settlement of a racially superior people of Teutonic stock. He welcomed “the prospects of flights of Germans settling here in increasing numbers – an orderly, moral, industrious and frugal people, less foreign to us than the Irish or Scotch Celt, a congenial element which will readily assimilate with our body politic.”

It’s no wonder that the Highland & Island Emigration Society would soon after go on to sponsor around 5,000 emigrants to Australia from the famine affected Highland areas of Scotland.

Note: Many thanks to Helen Abbott for finding this ship’s passenger log. The painting of the Clan MacAlister Highlander leaving Scotland for Canada is from Victorian times and is by R.R. McIan.

In my post Graffiti Mystery, I mentioned Thomas Scott’s 1855 sketch of what looked like the church building’s weather vane.

Well, I’ve since discovered that this is not the only graffiti sketches of ships carved into the pews.

As I scoured the ground floor pews I found these; 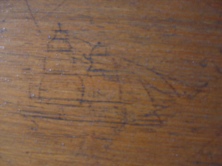 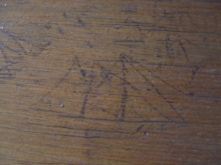 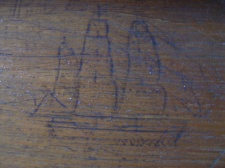 It would seem that sailing ships were a commonplace sight in Ardrossan so me thinks I’ll need to do a little research to see just how significant a harbour area Ardrossan was back in the 1800’s.

Following on from my Victorian Graffiti post where I mentioned graffiti that had been carved during the time of the American Civil War (1861–65), I came across a post from Helen Abbott on Memories of Ardrossan‘s Facebook page regarding Ardrossan’s part in this war;

British officials debated intervention in the first 18 months of the American Civil War. Elite opinion tended to favour the Confederacy (after all, Scotland and the UK prospered from cotton, sugar and grain from the South and, Scotland in particular, supplied ships and munitions to the South), while public opinion tended to favour the North and its anti-slavery stance.

Large scale trade continued in both directions, with the Americans shipping grain to Britain and Britain sending manufactured items, ships and munitions to America.

Immigration continued into the U.S., with Britons volunteering for the Union Army and British trade with the Confederacy fell over 90% (from pre-war), with a little cotton going to Britain and some munitions slipped in by numerous small blockade runners. The blockade runners were operated and funded by British private interests; they were legal under international law and were not a cause of dispute between Washington and London (at least not officially). 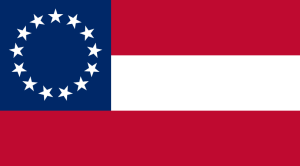 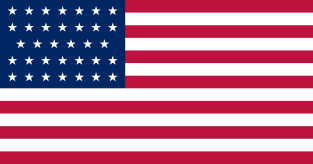 Cargo: Iron,
Ship caught by the Confederate Cruiser Ship TALAHASSE, (a confederate merchant raider)
During the American civil war. The Glenavon was burned and scuttled, 22 Officers, Crew, and Passengers transferred to the barque Atlantic (Russian ship).

“It was scarcely daylight before two sail were reported, and in a few moments both were

alongside. One was an English vessel, which, of course, we could not touch; the other, the barque Glenavon, of Thomaston, Maine, from Ardrossan to New York, with a cargo of pig-iron.
This was a fine, new barque, with splendid spars and double topsail yard.

The captain had his wife on board,–a brave, good woman,–and a female servant. There were two passengers in the cabin, an old sea captain and his wife, the latter a perfect termagant, and very offensive to all on board. Her tongue was never idle, and her time about equally divided between abusing her husband, who bore it like a lamb, and distributing testaments and tracts among our men. The art of making everybody disagreeable was carried to perfection with this horrible woman, and the scoldings she gave the poor captain who was tied to her apron string struck every one dumb with astonishment. The last act of revenge on the poor man was just as she was leaving the side, when the old lady, in a fit of anger, tore off her new bonnet and threw it in the sea.

We (CCS TALAHASSE) got a quantity of mess stores from the Glenavon, a few luxuries, some hams, a coop of chickens, and two pigs. After removing all things of immediate service to us, Lieutenant Ward had her scuttled, and she sank rapidly. Before we were out of sight she went down by the head, and sank forever beneath the ocean. It seemed a pity to destroy such a noble craft, and I looked upon our work with sorrow.”

*Note: Although a sad ending for a fine ship, I love the ‘official ship’s log’ description of the old sea captain’s wife. “The art of making everybody disagreeable was carried to perfection“. Very sharp humour.

I hope you enjoyed this historical connection to Ardrossan and the connection with the date in which some graffiti carved on the pews of the Barony St. John church …. and huge thanks once again to Helen Abbott for some of the historical information regarding the Glenavon.

If you’d like to know more about the work we are doing to save and restore the iconic Barony St. John buildings, or to lend a hand, or simply to know about our charity, feel free to comment below, visit our website http://www.ScotCPS.org.uk or visit our Facebook page – The Scottish Centre for Personal Safety.

Until next time, stay safe.

I thought it would be nice to arrange a 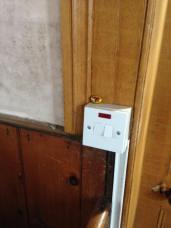 n Easter egg hunt for my two young children in the former Barony St. John church building, so I hid 28 mini eggs around the building (14 on each side – 7 upstairs and 7 downstairs), gave them a side each to make it fair and set them off hunting.

Now you may remember, in a post I made a few months ago, A Good Word for the Good Book, I explained how my young children had found a number of old bibles, some dating back to 1877 – well, all was going well with the Easter egg hunt when Daniel came back with an old bible.

Now the Church of Scotland had checked the church before 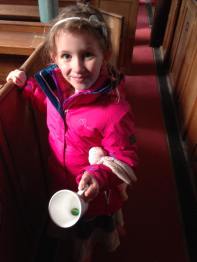 This bible was even older than the previous ones with a date inside of 1830 – some 14 years before the Barony St. John was built.

There were no inscriptions in it or names so no way of identifying the owner but there are some very beautiful drawings and artwork inside it. 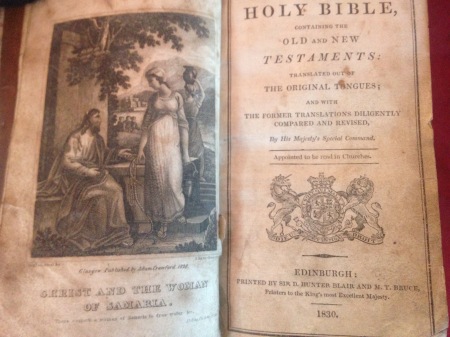 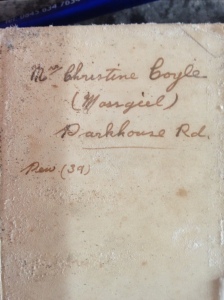 Daniel came back with another old bible, this one was inscribed;

I have no idea what Rooms 39 may mean – maybe a home for the elderly? But if anyone does know or knows who Mrs Coyle is or was, please get in touch.

In the meantime, I hope you all had a fantastic Easter and didn’t overindulge in the chocolate eggs too much. 🙂

Now, I’ve already showed you the transformation of our toilet facilities in my “Flushed with Success” post but I couldn’t open the hall building up with the place looking like it hadn’t been decorated since 1887, so I thought you’d like to see some Before and After shots –

First came the entrance to the hall which needed the roof leak repaired, the ceiling re-plastered, walls and ceiling re-skimmed and finally a transforming paint job…. 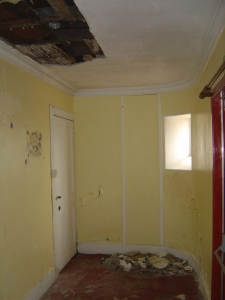 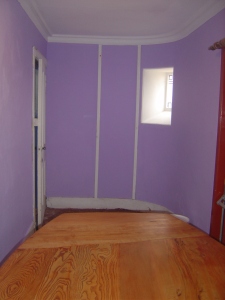 You can also see the beautiful boardroom table which was donated to us by Glasgow Community Safety. (Many thanks guys) It’ll be moved to our Training Room once that is renovated. 🙂

Next came the corridor, filling in the cracks and holes, sanding all the gloss paint down, bleaching off the years of mould and finally painting it…. 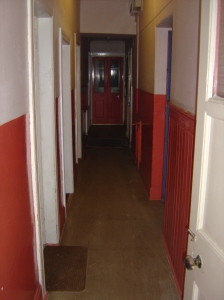 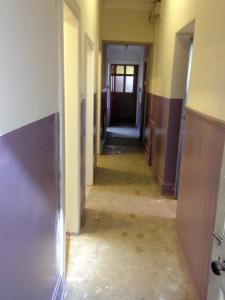 And lastly came the kitchen changed from a cluttered, wallpaper walled, mould ridden mess into a re-plastered look (re-plastered mainly due to part of the original plaster wall disintegrating when the wallpaper came off and partly due to the original gloss paint underneath the wallpaper peeling in patches and making the whole wall an uneven mess)…. 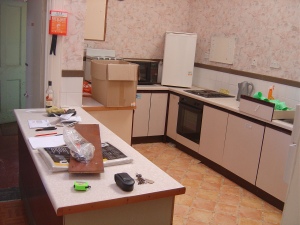 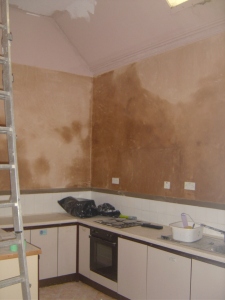 And finally transformed completely with a coat of paint (well, several coats actually)….. 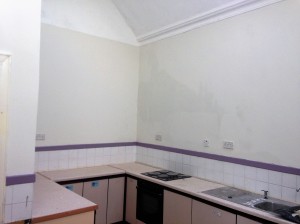 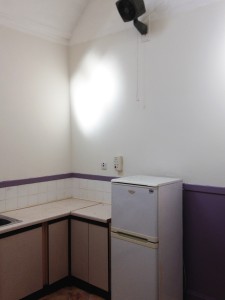 I’m delighted with the finished results.

It took me many weeks to finish the paint job but with Paul the builder and his team helping me re-plaster and skim the walls, I eventually got the job done. 🙂

I hope you like it as much as I do.

Next time I will tell you about the Victorian advert we found for Harness’ Electropathic Belts but for now, stay safe – and keep smiling 😀